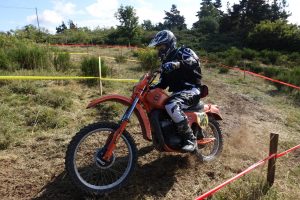 Speedy Working Motors, or SWM as they are better known, started producing motorcycles in Milan, Italy in 1971.

Co-founded by Piero Sironi and Fausto Vergani, they began by producing small capacity Sachs engined Enduro and Motocross bikes. It wasn’t until 1977 that they ventured into to the Trials market with their 125 and 320 Rotax engined two strokes.

…Rotax had developed for SWM a version of their disc valve motor which, at the time, was unique to the trials world. The first Red and White models, which had development input from both Sammy Miller and Charles Coutard, utililised the very best in Italian components such as Marzocchi suspension and Acerbis plastics. 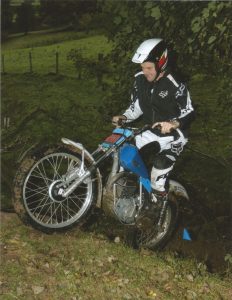 From the initial launch the bike proved successful, with only minor changes to the motor during its 8 year production run …

… In 1979 the factorylaunched the first of the familiar yellow and black models which a year later were fitted with Betor forks and Girling Gas shocks.

To complement the existing range, 1982 saw the introduction of the 240 model, which in recognition of the trials teams sponsorship from the French firm Pernod, had the frame painted Blue.

In 83 the bikes were treated to an aluminium swinging arm and that year also saw the introduction of the TL350 Jumbo. The Jumbo used an all new case read Rotax motor, which was housed in a totally new frame fitted with the now familiar yellow Acerbis Plastics.

The final models produced in 1984 also saw the 125 and 320 motors fitted into the Jumbo chasis, but production was ceased later that year when SWM went into liquidation..

At the end of the ‘70s, the introduction of Italy as manufacturer of trials bikes ended the total domination of the Spanish three, Bultaco, Montesa and Ossa.

Much of this success was down to attracting the best riders, many of which, had their spell with SWM. Miller, Coutard and John Reynolds piloted the early models, whilst the likes of Martin Lampkin and Bernie Schreiber took their respective national titles for SWM. However, the pinnacle of the success story was the 1981 world title and Scottish Six Days win by French teenager Gilles Burgat.

National titles and world round success were also recorded by stars such as Thierry Michaud, Danillo Galeazzi, Bernard Cordonier and John Lampkin. 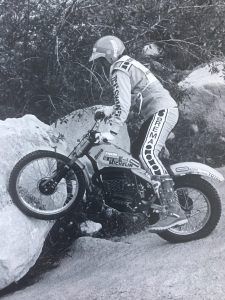